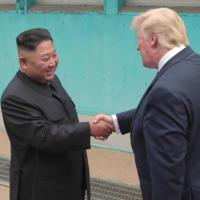 Prior to his historic meeting with Kim Jong Un in North Korea, President Donald Trump made the unfounded claim that Barack Obama tried many times to meet with Kim, but was rebuffed. Obama administration officials and experts on U.S.-North Korea relations say that’s not true, and Trump offered no evidence to back up his claim.

how can this so-called president be lying so constantly and so clearly, and get away with it?

simple, there's no real democracy in that country.